I usually associate quiet, mostly acoustic music with shows in real theatres so I was very curious what one of the loudest bands on this planet would do in such an environment. The gig was part of the K15 festival at the Schauspielhaus in Bochum.
First, Zidane: A 21st Century Portrait was screened, a documentary about Zinédine Zidane shot during a Spanish league match with the soundtrack written by Mogwai.
Then Mogwai entered the huge stage and started off quieter than usual. The sound was crystal clear and, therefore, you could hear so many more details of the multifarious songs than in an ordinary club where the sheer wall of noise seems to drown everything. But the deafening outbursts came and the whole building seemed to be shaken to its foundations.
Especially the last song of the set, a massive extended version of Batcat from their latest album The Hawk Is Howling nearly blew the roof off the Schauspielhaus. It was the perfect finale of a superb 100 minute show.
I guess I'm spoiled but I can't imagine wanting to see a normal Mogwai concert again with all the limitations of a rock club now I've experienced how brilliant they can sound in a perfect place. 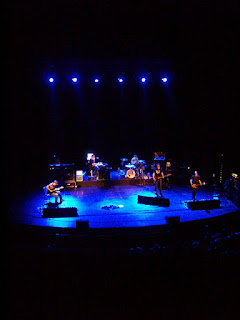