There's no band I've seen more often than Therapy? and, not surprisingly, no band I've seen more often abroad. And when you've even travelled to Romania to hear them live it was obvious for me that I should fly to London to get alive impression from their new record Crooked Timber.
I arrived at the Academy at around 7.30 pm and the first band, Kidnapper Bell, had just started to play to a bunch of about 150 people. I was a bit afraid that Therapy? might have lost their popularity over the years (in 2004 I've seen them play a well filled Astoria, R.I.P) but when the second band on the bill, Therapy?'s label mates The Sound Ex, started their set more and more people filled the club. The Sound Ex were really great playing a Hellacopters style rock'n'roll with a lot of action going on on stage.
Over the past years Therapy? always played a sort of greatest hits set with some (usually four or five) tracks from the new album they just had out. But last night was different: Crooked Timber was played in its entirety and apart from some old crowd pleasers like Potato Junkie or Teethgrinder rare stuff like Fantasy Bag or the old b-side Summer Of Hate also featured in the set. Nonetheless the crowd went nuts and the meanwhile packed place danced and sang along to the songs. except to the epic instrumental Magic Mountain, of course, which opened the encore. Not only during this song did Andy Cairns sometimes have problems with his timing or hitting the right chords but that seems understandable considering that it's been over a year the band since the last toured and the load of new stuff to learn.
Three old Troublegum classics finally put an end to a great show and left behind an exhausted crowd. 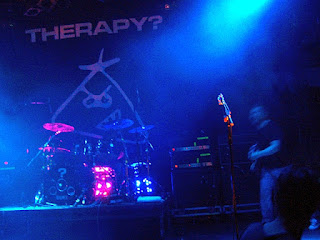