The last chapter of my Therapy? trilogy started in a most dramatic but enjoyable way: I went from Frankfurt straight to Mönchengladbach to see Borussia score three points against Schalke due to a last minute goal which keeps their hopes of avoiding relegation alive. After the match I took the next train to Cologne to arrive at the Underground just in time to see the T? guys enter the stage.
The show was the best of the three I've seen, the Underground was well filled with a crowd willing to party, the sound was really good and the band seemed to be in a good mood as well.
Again all the Crooked Timber songs were played but, as in Frankfurt, there were variations in the setlist regarding the other tracks, e.g. If It Kills Me and Fantasy Bag were left out, instead Rust and Innocent X were in.
But the most remarkable thing was Andy's new haircut. 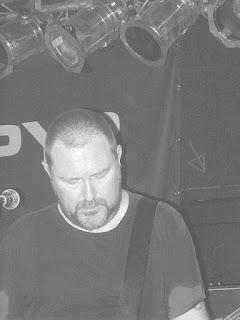