Second part of my Therapy? trilogy. The gig was part of a party at the university to celebrate the start of the new half term which meant it was cheap but most of the people weren't there to see Therapy?.
As me and my girlfriend met one of my best mates, Stephan, for the first time since his move south to Heilbronn as well as the usual suspects Robby and Roxy whom you can be sure to see at nearly every T? show in Germany or the Low Countries and, as special guests, Petri and Kati from Finland who flew down just for the gig we missed the two other bands.
Therapy? entered the stage at about 11.30 pm and right at the start the PA failed but soon got working again. But technical problems continued throughout the gig, one speaker occasionally going on and off all the time. Anyway, the band didn't seem to care neither about this nor about the quite indifferent crowd. They played the whole Crooked Timber album again and also included Polar Bear and Diane in the set. The Troublegum finale even got the lazy students going and marked the end of an overall average T? show. 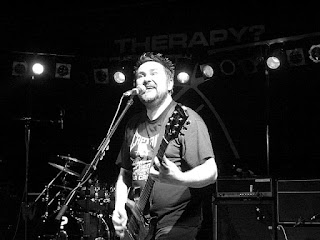